both of the widely watched releases this week were on April home sales; first on existing home sales from the National Association of Realtors, then on new home sales from the Census Bureau…there was also a “flash” manufacturing report for May from Markit (pdf), based on incomplete survey returns, which reported a tentative PMI (purchasing managers index) of 56.2, up from 55.4 in April, which means more manufacturing purchasing managers were reporting expansion than a month ago, and the May Manufacturing Survey from the Kansas City Fed (pdf), which reported a monthly composite index of 10 in May, up from 7 in April, for the third straight month of expansion at factories in their region that includes western Missouri, Colorado, Kansas, Nebraska, Oklahoma, Wyoming and northern New Mexico..

this week also saw the release of the Chicago Fed National Activity Index (CFNAI) for April, a composite index of 85 different economic metrics grouped into four broad categories of data, each constructed to have an average value of zero, such that a positive index reading corresponds to growth above trend and a negative index reading corresponds to growth below trend…the April reading of the CFNAI was at -0.32, down from +0.34 in March, as production related indicators subtracted .37 from the overall index after adding .24 to it in March, for many of the same reasons we covered in the industrial production report of last week…the consumption and housing category of indicators also subtracted .12 from the overall index, a bit more negative than the -.07 deduction in March, as consumption related indicators trended lower…employment related indicators, on the other hand, added .17 to the index, and improvement from March’s contribution of .15 mostly, on better top line metrics from the April employment report, while the sales, orders, and inventories was on trend and made no contribution to the composite index, after subtracting .01 in March…the three-month moving average of the index, ‘CFNAI-MA3’, increased to +0.19 in April from +0.04 in March, its second consecutive positive reading and its highest value since November, as the contraction of the winter months dropped out of the moving average…

according to the National Association of Realtors, April saw the first monthly seasonally adjusted increase in existing home sales this year, as they reported existing-home sales rose 1.3% to a seasonally adjusted annual rate of 4.65 million homes in April, up from a 4.59 million rate in March, but still 6.8% below the 4.99 million unit annual pace homes were selling at in April of last year…that annual rate of sales was extrapolated from reported sales of 421,000 homes in April, up from the unadjusted 355,000 homes sold in March, but down from the 454,000 completed transactions involving single-family homes, townhomes, condominiums and co-ops of April a year ago….seasonally adjusted data (pdf) indicate increases in sales were concentrated in the West, where they rose 4.9% over March, while sales in other regions were little changed…..the median home selling price for all housing types was $201,700, up from $196,700 in March and 5.2% higher than the $191,800 median sales price in April of last year, in home price data that is not seasonally adjusted…the average home sales price was $250,600, up from $244,800 in March and $241,700 a year ago, with the average home prices in the West at $334,600 far above the average $189,500 homes sold for in the Midwest….foreclosed homes, which sold for an average of 16% below the market, accounted for 10% of April sales, while short sales, at 5% of the total, were discounted by an average of 10%…the pie graph below, taken from an NAR graphic summary of April data, shows the percentage of April homes sold in each of several prices ranges; while it’s obvious most homes were sold for below $250,000, those selling for over $500,000 still accounted for a substantial 11% of all sales..

buyers identified as investors accounted for 18% of sales, up from 17% in March but down from 19% a year ago…according to the NAR, all-cash sales accounted for 32% of April transactions, down from 33% in March but unchanged from 32% in April of 2013; the percentage of all cash sales seems to be a matter of some debate, as CoreLogic puts it at 40%, down from 43.7% all cash sales a year ago, whereas RealtyTrac’s 1st Quarter Institutional Investor & Cash Sales Report reported that all-cash transactions accounted for 42.7% of all residential property sales, up from 19.1% in the 1st quarter of 2013, while Morgan Stanley puts all cash sales at 39% in the 1st quarter, up from the second half of last year but below the all cash sales percentages in the first quarter of each of the last three years…meanwhile, first time home buyers accounted for just 29% of April sales, unchanged from a year ago, as Freddie Mac reported that the average rate for a conventional 30-year fixed-rate mortgage at 4.34% was unchanged from March…2.29 million homes were available for sale at the end of April, a 5.9 month supply at the current sales pace, up from the 1.99 million homes for sale at the end of March…the FRED graph below, which can also be viewed as an interactive, shows the seasonally adjusted annual rate of existing home sales monthly since January 1999, or the complete NAR record….since each months sales as reported by the NAR and as shown on the graph are annualized, the numerical sales count shown for any given month is rendered fairly meaningless in the attempt to show the overall trend in home sales over time… 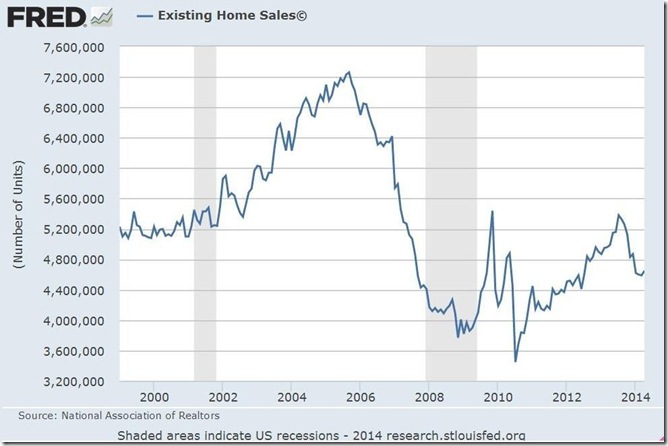 the other report on home sales was on New Residential Sales for April (pdf) from the Census bureau, which you’ll recall has the largest margin of error and is subject to the largest revisions of any census construction series….as is usually the case with this report, Census did not have sufficient data to determine whether new home sales rose or fell for the month or even over the preceding year when they estimated that “sales of new single-family houses were at a seasonally adjusted annual rate of 433,000 in April, which was 6.4 percent (±15.9%)* above the revised March rate, but 4.2 percent (±14.2%)* below the sales rate of April of last year”…what they’re telling us there is that at the rate they estimated new homes were selling in April, it’s 90% likely that total new homes sold over a year would range between 364,153 and 501,841…actual estimated sales for April were 41,000, up from 39,000 in March and the highest since an estimated 43,000 new homes were sold in June a year ago, and of course, allowing for rounding in that estimate, a similar ±15.9% margin of error could be applied to one month’s unadjusted sales totals…all of the reported increase was in the Midwest, where new home sales were estimated at 8,000, up from 5,000 in March, in a regional figure with a margin of error of ±61.4%…of those homes sold in April, 9,000 were not yet built, 9,000 were completed, and 12,000 were still under construction…along with the estimates for April, the annual rate of new home sales for March were revised from a seasonal;ly adjusted 384,000 rate to 407,000, while February’s sales were revised down from an annual rate of 449,000 to a 437,000 rate..

the median new home sales price was $275,800 in April, down from $290,000 in March; while the average sales price was $320,100, down from the previous month’s $334,200…even with that April decline, almost 45% of April’s new homes sold for over $300,000, while those under $150,000 accounted for less than 5%, in new home prices that are now higher than those during the housing bubble… the Census estimated that a seasonally adjusted 192,000 new homes remained unsold at the end of April, which was a 5.3 month supply at the current sales pace, down from a 5.6 month supply in March….the FRED graph below show the historical data from this Census report, with the monthly sales reported as an annual figure just as the NAR existing home sales graph above…the insert shows the readout from April on the interactive version of this graph, which will give you an annualized new home sales number for every month in the Census data set as you run your cursor across the graph…

Russia Deals Its Gas to China; US Shale Oil Reserves Are Cut by More than Half

there were also two major energy stories worth noting this week; first, in a deal almost one-fifth the size of the Russian economy, Russia and China signed a $400-billion agreement for the former to supply 38 billion cubic meters of natural gas annually over 30 years at a price at the low end of what it changes European customers, culminating after almost of decade’s worth of negotiations…Russia has also committed to spending $55 billion on pipeline infrastructure for transporting the gas to China, which could be expanded in the future to deliver as much as 61 bcm per year…as Putin himself was in Beijing to close this deal, it seems likely that the concessions he made to China were at least in part precipitated by US and NATO economic sanctions against Russia over the situation in the Ukraine…needless to say, this, and a smaller deal to supply 3 million tons of liquefied natural gas (LNG) annually, reshapes a major part of the global energy map, as China’s need for LNG imports from Indonesia and the Mideast will be reduced, while the Russian gas supply to Europe becomes even more tenuous..

of even greater importance to us domestically, the Energy Information Administration cut its original estimate of recoverable oil reserves in California’s Monterey shale by 96%, from the original estimate of 15.4 billion barrels of oil down to 600 million barrels, or only enough to meet current U.S. oil consumption usage for 32 days…this shale play had been expected to yield twice the oil of the Bakken shale in North Dakota, or 5 times as much as the Eagle Ford in Texas, and was said to be nearly two-thirds of the known shale oil reserves in the US….so what happened, and how were they so wrong in their first estimates?  to start with, the Monterey shale is still there, roughly between 6,000 and 15,000 feet below the California surface, depending on the topography…and it’s still embedded with as much oil as it ever was, being that it’s been the source of most of California’s conventionally exploited oil…the trouble with exploiting California that wasn’t a problem in the other areas of the country where fracking has been used is that California has been through hundreds of millennia of tectonic upheavals, such that the layers of bedrock under the state are no longer piled one on top of another like a stack of pancakes as they are in other parts of the country…that means that it’s simply impossible to exploit most sections of the Monterey shale by horizontal fracturing, aka fracking…to illustrate this, below we have a schematic diagram of a typical horizontal fracked well; you can see that the original well bore typically goes to a depth of a couple thousand feet to a mile or more to reach the oil or gas bearing strata, after which horizontal bores are made through the horizontal shale, often in several directions, from which bores the shale is blasted apart by a high pressure stream of water, sand and chemicals to yield the oil or gas…immediately below that schematic, we have a picture of the Monterey shale from wikipedia…it’s pretty obvious that it would be impossible to drill horizontal shafts in that formation to exploit just one oil-bearing strata…so obvious that we have to wonder why no one had pointed out that simple fact before today…anyone want to venture a guess as to how many suckers they got to invest in the Monterey shale before this was made public?

(the above are the comments that accompanied my regular sunday morning links emailing, synopses which in turn were mostly selected from my weekly blog post on the global glass onion…if you’d be interested in receiving my weekly emailing of selected links that accompanies these commentaries, most from the aforementioned GGO posts, contact me…)

This entry was posted in Uncategorized. Bookmark the permalink.